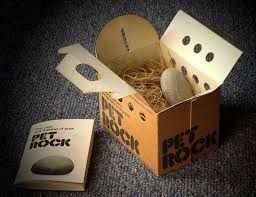 Gary Ross Dahl, who died earlier this year at age 78, will always be remembered for inventing the ‘Pet Rock’, a 1970s novelty toy craze. The brilliant salesman essentially sold rocks for a living, and managed to make millions through his “ridiculously successful marketing scheme.”

Oddity Central reports that although he began his career as an advertising copywriter, Dahl quickly turned entrepreneur when his idea of selling rocks as pets took off. It all started one night in the mid-’70s, while having a drink at a local bar in Los Gatos, California. People around him were talking about pets, and about how difficult it was to feed, walk and clean up after them.

Struck by sudden inspiration, Dahl declared that he had no such trouble with his own pet. “I have a pet rock,” he told the crowd. And his response was so well received that he began to toy with the idea, eventually setting up a business around it.