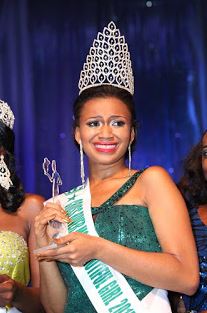 The only state pageant organized by an individual that continues to stand out in the scheme of things in the whole of Africa remains the prestigious Cross River Most Beautiful Girl (CRMBG), an event organized by ex-beauty queen of Most Beautiful Girl in Nigeria (MBGN), Isabella Agbor Ayuk under her Belle’Sabel Grooming Agency (BGA) in collaboration with SilverBird Group.

After it debut in 2014 with her pioneer queen being Prosper Achu Ayuk, CRMBG has continued to soar in lips and bounds as the sole platform for the selection of the teaming beauties from Cross River for a true Cross River representation at the MBGN event; and it should not be forgotten in a hurry that being the first state pageant to be given consent by Silver Bird Group to craft its event after MBGN.

The event as produced by pageant specialist, Joe Esse considering the theme “The Year of The Goddess” did not only step up its game in every aspect of its organization but went further to consider four more main extra mouth watery crowns, a rare opportunity for more pageants to exploit the platform provided for them by CRMBG to impact on society and to soar to greater heights in their career; and so the four extra titles include CRMBG Culture and Heritage, CRMBG Tourism, CRMBG Face of Belle’Sabel and CRMBG Ambassador of the year.

For this year’s edition of CRMBG holding at the Cultural Centre Main Bowl, Calabar, the contestant representing Ikom Local Government Area, Queeneth Onyoduma Awukam, age 20, swept resounding victory over 17 other contestants representing the other local government areas of Cross River and she will represent Crossed River State in the MBGN pageant 2015.

the three statutory pet projects of CRMBG, namely, campaign against typhoid fever, malaria parasite, assisting the less privileged and otherwise vulnerable women and youths of society in the areas of small and medium enterprise (SME) development.

The event registered exclusive performances by Patoranking, Robert Ekpo and with a blue-carpet interview by entertainment researcher and writer, Obaji Akpet while the event proper was anchored by the award winning Silverbird TV personality, Anthony Abraham and talk show goddess, Diana-Mary Owan.