The cash prize, Naij.com gathered, is the biggest ever pay-out in the history of Nigerian boxing, as the talented Lagos-based pugilist also went home with the Mojisola Ogunsanya Memorial Trophy and plenty of adulation, following his defeat of Kazeem “Iberu” Ariyo, by unanimous decision, after the eight-round contest. 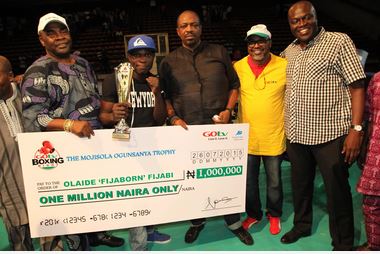 Fijabi, who was a clear favourite, knocked down ‘Iberu’ during the fourth round of the encounter and never really looked threatened by his more experienced counterpart as he left everyone screaming, “fijabi” during the eight-round bout.

Another interesting contest on the night was the title fight between Sule “Tyson” Olagbade, National Light Middleweight champion, who retained his belt following his defeat of challenger, Rasheed “Afonja Warrior” Abolaji in their keenly-contested 12-round bout.

Abolaji looked very comported in the early stages of the fight and was almost certain to win the belt from Olagbade, a police inspector, but the experienced title-holder held on to retain his belt to the admiration of teeming fans at the venue of the contest.

Nigeria’s Helen “Iron Lady” Johnson proved too much for Ghana’s Gifty “Tiger” Ankrah, defeating her during the six-round challenge.

The most astonishing contest yet on the night was the clash between Olympian, Onoriede ‘Onos’ Ehwarieme and Adewale ‘Masevex’ Masebinu. 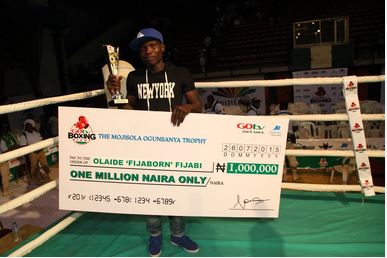 It took Onoriede only two rounds to give his opponent a technical knockout in what was only his(Onoriede) second fight on Nigerian soil as Masebinu could not regain his composure to continue with the contest.

About 50 free decoders were also given out by organisers of the event and several other consolation prizes.