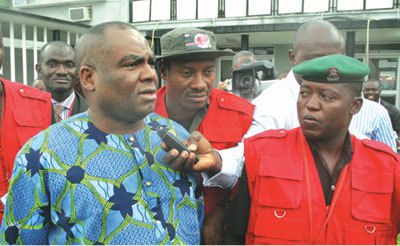 The companies, which were alleged to have failed to comply with lawful inquiry made by the Economic and Financial Crimes Commission, EFCC, had on May 19, 2015 pleaded guilty to a 10-count amended charge proffered against them by the Commission.

According to a statement by the Head, Media and Publicity of the EFCC, Wilson Uwujaren, at today’s sitting, counsel to the EFCC Kelvin Uzozie, prayed the court to make an order of final forfeiture of the companies based on their plea.

The trial judge, Justice Mohammed Yinusa, after reviewing the facts presented before him, convicted the companies and made an order of final forfeiture of their assets to the Federal Government, citing provision of the EFCC Establishment Act on Final Forfeiture.

The properties, according to the statement, are located across the five states in the South East geopolitical zone.

Properties of Rainbownet Communication which include BTS, Microwave Avenue Radio, Rectifiere, and a host of the equipment in various sites in Anambra States are also to be forfeited to the Federal Government.

The statement noted that aside the landed properties, over N35 million from the frozen bank accounts of the companies are also to the forfeited to the Federal Government of Nigeria.

Counsel to the EFCC, who expressed satisfaction with the ruling, said the Commission had to sought for a separate trial of the companies as the former governor had stalled proceedings on the matter on account of frequent application to travel abroad for medical treatment on grounds of ill-health.

According to the charge, Nnamani conspired with other accused persons to launder funds from the state treasury, especially monies meant for the local government areas of Enugu state.