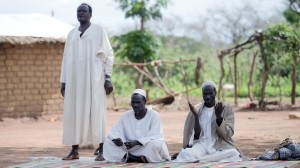 Militias have taken advantage of the political vacuum in Central African Republic (CAR), engaging in ethnic cleansing of Muslims in a bid to erase the community from the country, human rights group Amnesty International has said. Aljazeera reports:

Discussing Friday’s report, entitled “Erased identity: Muslims in ethnically cleansed areas of the Central African Republic,” Joanne Mariner, a senior crisis response adviser at the UK-based organisation, told Al Jazeera that Muslims in the western half of the country were being repressed and forced to abandon their religion.

More than 30,000 Muslims are living in seven enclaves, guarded by UN troops, across the country, but for those living outside, especially in rural areas, they are being targeted with impunity, the report found.

“They not allowed to express themselves as Muslims; if they are outside the enclaves, they cannot pray, dress in any way that identifies them as Muslim,” Mariner said. “Their survival depends on a daily routine of negotiation with anti-Balaka fighters.” Mariner said that many had been forced convert to Christianity or face persecution from the community