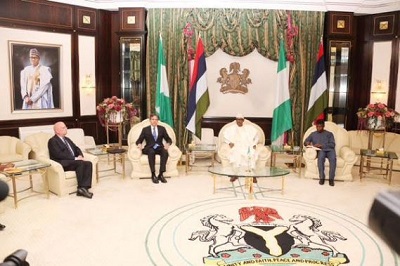 President Muhammadu Buhari has expressed optimism that his forthcoming meeting with President Barack Obama at the White House on July 20 will further strengthen bilateral ties between Nigeria and the USA.

Special Adviser on Media and Publicity to the President, Mr. Femi Adesina, quoted Buhari as saying this at the Presidential Villa in Abuja on Wednesday during a meeting with the US Deputy Secretary of State, Mr. Anthony J. Blinken.

The presidential spokesman also quoted Buhari as saying that his talks with Obama would also give a much-needed impetus to his government’s efforts towards overcoming the challenge of terrorism.

The president, according to the statement, said Nigeria also looked forward to greater support from the United States for the multinational Joint Task Force being mobilized against Boko Haram.

It said Buhari stressed that Nigeria and other Gulf of Guinea nations would also welcome more cooperation from the US to enhance maritime security in the Gulf and curb crude oil theft.

Earlier, Blinken had commiserated with President Buhari and all Nigerians over the recent loss of lives in terrorist attacks.

Adesina quoted the Deputy Secretary of State as saying that he was convinced that Buhari’s election would further expand the frontiers of the existing relationship between Nigeria and the US.

He further stated that Blinken assured Buhari that the US government would be ready to discuss all matters put forward by the Nigerian government during his visit to Washington DC this month.