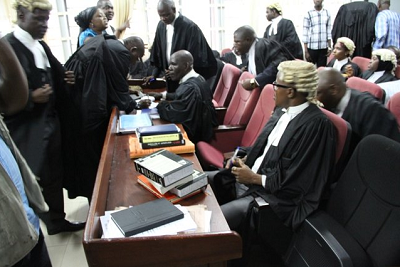 Ibrahim Ahmed Mazangari, Muhammed Sani Suleiman, Hajiya Fatima Mazangari, Saleh Yerima Tsojon and Xangee Technologies Limited were to be arraigned by the Economic and Financial Crimes Commission on a 29-count charge bordering on stealing and obtaining by false pretence, but the arraignment was stalled as a result of the absence of the 3rd accused, Fatimah Mazangari, whose counsel, Ibrahim Salau claimed, was very sick.

He consequently pleaded for a short adjournment to allow his client recover and be present in court to take her plea.

But before the court adjourned proceedings to September 15, 2015, Salau (representing the 1st and 5th accused) informed the court that his clients had opened a plea bargain discussion with the prosecution, but without wasting time, Justice Talba forbade him from broaching the subject of plea bargain in his court.

“Don’t mention plea bargain here. I don’t want to hear about it”, the judge warned.

The accused persons, who were offered a biometric contract by a former Head of the Civil Service of the Federation, Steve Oronsaye, to regularize names of pensioners on the pensions’ payroll, allegedly smuggled in names of fake pensioners, and collected unearned pension.

Count one of the charge reads; “That you Ibrahim Mazangari, Muhammed Sani Suleiman, Hajiya Fatimah Mazangari, Saleh Yerima Tsojon and Xangee Technologies Limited between 2010 and 2011 within the jurisdiction of this Honourable Court, conspired amongst yourselves to commit an offence to wit: obtaining the sum of N1,200,000,000.00 ( one billion, two hundred million naira) from the Federal Government of Nigeria by false pretence and with intent to defraud, purporting same to be monthly pension payable to M, S. Suleiman, Saleh Yerima, Tsojon, Isah U. Adamu, Daniel Mikano, Abdulahi Garba Musa whom you falsely held out at pensioners of the Federal Government by inserting their names in the pensioners’ payroll and you thereby committed an offence contrary to Section 8 (a) of the Advance Fee Fraud and Other Fraud Related Offences Act, 2006 and punishable under Section 1(3) of the same Act.”

“That you Ibrahim Ahmed Mazangari, Khalid Ali Biu(now at large) and Xangee Technologies Limited on or about 19th December, 2011 within the jurisdiction of this Honourable Court, by false pretence and with intent to defraud, obtained an aggregate sum of N83, 410, 473.04 (Eighty-Three Million, Four Hundred and Ten Thousand, Four Hundred and Seventy-Three Naira, Four Kobo) from the Federal Government of Nigeria which sum was paid into the Fidelity Bank Account of Xangee Technologies Limited purporting same to be for the contract allegedly executed for the Federal Government of Nigeria and you thereby committed an offence punishable under section 1 (3) of the Advance Fee Fraud and Other Fraud Related Offences Act, 2006”.