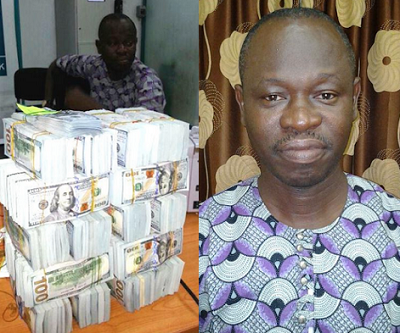 Officials of the National Drug Law Enforcement Agency NDLEA, at the Murtala Mohammed Airport (MMA), Ikeja, on Wednesday, intercepted the sum of $2,198,900 from a passenger, who was about to board a flight from Lagos to Abuja.

The money was seized from the passenger identified as John Bamidele Ibiteye by NDLEA operatives on suspicion of money laundering at the local wing of the MMA2.

Ibiteye, 46, is currently being investigated in connection with the fake currencies.

In a statement by its Head of Public Affairs, Mitchel Ofoyeju,the anti-narcotics agency said that preliminary investigation conducted by the Assets and Financial Investigation Directorate of the NDLEA revealed that Ibiteye’s action ran afoul of the Money Laundering Prohibition Act 2011 as amended.

The statement noted that the suspect during interrogation, alleged that the money belonged to one Dr. Martins Olufemi Thomas, a medical practitioner in Lagos.

“Investigation conducted by the Agency did not link the money to proceeds of narcotics. However, a country having insurgency challenge cannot afford to ignore suspicious movement of such large amount of money.

“Consequently, the Chairman/Chief Executive, Ahmadu Giade, has directed that the suspect and the exhibit be transferred to the Economic and Financial Crimes Commission (EFCC) for further action, the statement read.

The suspect, it was learnt, in his statement, claimed to be a Bureau De Change operator.

“I used to work for Ebi Bureau De Change at the Federal Capital Territory (FCT), Abuja before I established my company with the name ND&C Global Investment Limited, which is yet to be fully registered with the Corporate Affairs Commission (CAC).

“One of my clients, Dr. Martins Olufemi Thomas gave me the said amount to take to Abuja. I was arrested by NDLEA officers while checking-in the money at MMA2 on my way to Abuja”, he said.