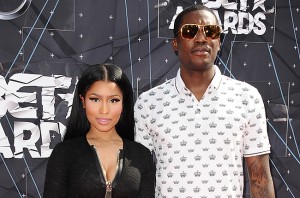 Superstar rapper, Nicki Minaj has decided she wouldn’t want to go down as one of those baby-mamas all over the industry.

In a recent interview in promotion of ‘Dreams Worth More Than Money’, Meek Mill addressed the recent rumors his girlfriend, Nicki Minaj is pregnant.

Meek Mill slammed the reports but at the same time admitted he wished she was carrying his child.

The Barbz (name for the group of devoted fans of Nicki Minaj) took notice of the interview and made sure Nicki catches wind of it as well.

Once she heard his boyfriend’s comments, she made it clear she is not getting pregnant until he puts a ring on it.

“No matter wut he (Meek Mill), or anyone else says, Onika Tanya Maraj won’t b pushing anyone1 out her vajayjay, until she’s married. Now check that” she wrote.