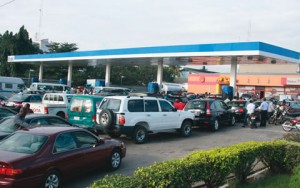 The report released yesterday also indicates that though there was a 5.3 percent drop against previous month’s record high of N118.4, fuel prices have been on high pitch since the turn of the year, yielding an overall year-on-year increase of 7.3 percent above 2014 average.

The state with the highest price was Bayelsa, a major oil producing state, at retail price of N155 per litre, up from N115 recorded in the previous month.

The three states also show declines in the prices between May and June.

Apart from black market sales which often go at inflated prices, filling stations across the country have been selling fuel over the official pump price. The Petroleum Dealers and Owners Association in Ondo and Ekiti States last week Monday said it would not be able to sell fuel at the pump price of N87 per litre due to non-availability of the product.

“Specifically, total cost per litre of fuel from Lagos ranges between N104 and N108 while the landing cost per litre from Oghara/Warri in Delta State is between N105 and N108 per litre,” Chairman of the association, Mr Jimi Oladapo, said at a news conference in Akure.

“The landing cost is exclusive of operating expenses such as diesel to run the station, staff salaries and wages, strategies, office and pump maintenance.

“From the analysis, you will agree with us that it will be impossible for us to sell at the government approved price of N87 per litre,” he said.