No Perfect Govt Exists Anywhere In The World, Says Alamieyeseigha 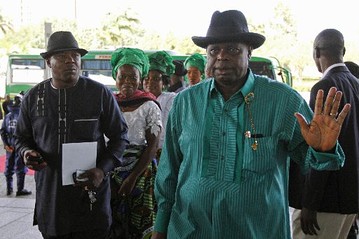 The first civilian governor of Bayelsa State, Chief Diepreye Alamieyesigha, has said no perfect system of government exists anywhere in the world.
The disgraced former governor made this position known in an interactive session with newsmen in Yenagoa on Saturday.
He advised, “There is no perfect government anywhere in the world. If a government programme and policies are facing challenges, it is not only the executive arm that takes the blame, the House of Assembly is empowered to check the excesses of the executive as an oversight function, so if the three arms of government are working in synergy, the people will be carried along”.
Alamieyeseigha also urged Bayelsans to vote for Governor Seriake Dickson in the forthcoming December 5 poll.
“I think we should give governor Dickson another four years to complete the projects he has embarked upon and properly hand over in 2020”, he advised.
The former governor described the incumbent’s performance in the last three and half years as very impressive, visible and commendable, saying “Under Dickson, we now drive to places which hitherto were not possible. We could see changes springing up here and there before the economic crisis hit the country”.