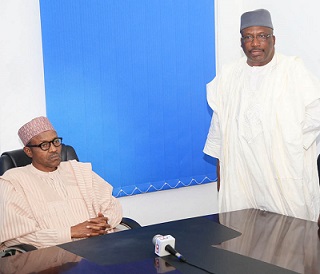 A former Chief of Army Staff, Lt.-Gen. Abdulrahman Dambazau, on Thursday denied that he was looking forward to holding a political appointment under the present dispensation.
The former army chief, who was apparently reacting to news reports that he was set to be named the new National Security Adviser by President Muhammadu Buhari on Monday until the last minute when the name of Maj.-Gen. Babagana Monguno (retd.) was announced, said he was not in the race for the position.
“What race? There was no race for the office of National Security Adviser (NSA). And if there was one, I was not a contestant”, Mr. Dambazzau said. “For very good reasons, people may have their expectations, but that should not be translated as mine. Of course I will be glad to work for the president if he assigned me any task or appoints me in any capacity he feels I can contribute towards the success of the government.
“This is especially because I was the CPC Chairman of the Security Committee in 2011 and he personally appointed me and also in 2015 as Director, Intelligence and Security of the APC Presidential Campaign Council.
“At any rate the President has the prerogative to appoint any person of his choice to any of the available positions, but in the final analysis it is God that determines who becomes what. My prayer therefore is for the Almighty God to guide President Muhammadu Buhari in this very important task of nation-building He has given him”.
Mr. Dambazzau was a regular face wherever Mr. Buhari went before the elections as coordinator of his security and even after he became president, the former army chief remained close to him and was part of his (Buhari) entourage to many state functions and meetings.
However, when the president was to appoint a new NSA, he chose Mr. Monguno instead of Dambazzau.
On his relationship with the president, Mr. Danbazzau said, “My relationship with Mr. President does not hinge on political appointment. Whether or not he assigns me to a particular office, my resolve to ensure that he succeeds remains unshakable. He is a person I highly respect and I am ready to support him throughout his tenure. I am not doing him a personal favour, but I consider it as a duty to contribute in fixing Nigeria. I have immensely benefitted from Nigeria after reaching the peak of my career as a General and commanded the army, and acquired the highest educational qualification (PhD), it is only reasonable to consider this opportunity as a payback time.”
“I am not unaware of some persons desperate to soil my name, mainly out of envy. I have built a very good reputation both home and abroad, I doubt very much if anyone can easily destroy it. Such people should not see me as an obstacle to their ambition, but like I said earlier, power and wealth belong to God and He gives whomever He wishes at the time He wishes”.