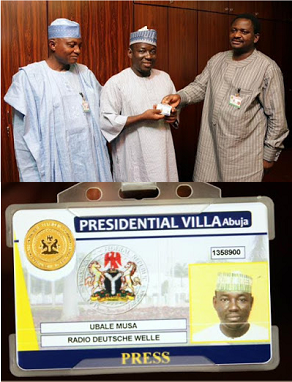 The Nigeria Union of Journalists, NUJ, on Tuesday hailed President Muhammadu Buhari for restoring the accreditation of the State House Correspondent of the German Radio, Deutsche Welle, Mr. Ubale Musa.

Musa was expelled from the Presidential Villa, Abuja, in the twilight of the Goodluck Jonathan administration for purportedly asking visiting Chadian President, Idris Derby, a question the ex-president and his handlers considered to be embarrassing.

His accreditation was however restored on Monday on the directive of President Buhari.

In a statement by its National Secretary, Shuaibu Leman, the NUJ described the restoration of Musa’s accreditation as a commitment of the present administration towards press freedom and openness in government’s affairs.

The union said the development would avail the citizens the opportunity to understand the efforts of government on national issues and would clear doubt and speculation.

“The media will support the Buhari administration’s commitment to sustainable growth of the Nigerian economy through fair and unbiased decisions on key economic policies and the fight against corruption and insecurity. We commend this heart-warming decision”, the statement read.

While presenting the re-issued Villa Press Pass to Musa on Monday at the Presidential Villa, Abuja, Special Adviser to the President on Media and Publicity, Mr. Femi Adesina, had said the re-accreditation of the Deutsche Welle correspondent was in tandem with Buhari’s commitment to correcting the ills of the past.

The presidential spokesman had said “Part of the change promised by President Buhari is correcting things that were wrongly done before.

“Mr. Ubale Musa’s accreditation was wrongly withdrawn. To redress the wrong done to him by the withdrawal, we have returned his Villa Press Pass to him so that he can continue his work without hindrance”.