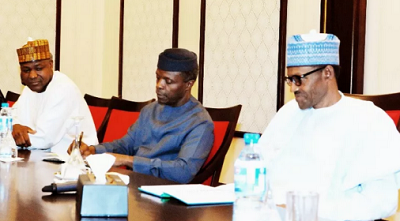 President Muhammadu Buhari yesterday again reinforced his stance on the lingering National Assembly leadership crisis, telling members of the House of Representatives elected on the platform of the All Progressives Congress that the party’s position is supreme.
The president was reported to have told the lawmakers to simply “Obey the party!”
The APC Reps members had a meeting on Monday with Mr. Buhari at the new Banquet Hall of the Presidential Villa but from all indications, it appears the parley, which was a last ditch effort at resolving the impasse in the Green Chamber ended in a deadlock.
The two different factions in the feud – the Speaker Yakubu Dogara and Femi Gbajabiamila groups – reportedly stuck to their positions at the meeting with President Buhari, which last not more than 20 minutes.
Some members of the APC National Working Committee (NWC) led by the party’s National Chairman, Chief John Odigie-Oyegun were also in attendance.
The House is resuming today after nearly a month break with fears expressed that if a solution is not found and quickly too, Tuesday’s plenary might end up in another round of violence.
Gbajabiamila’s group is demanding that the APC’s position on the selection of principal officers be implemented by the Speaker, whose Consolidation Group believes that federal character must be reflected in the sharing of offices.
On emerging from the meeting, both camps, however, seemed to agree on one thing – the president’s counsel that the party should not be undermined must be obeyed.
President Buhari was reported to have told the APC lawmakers in no uncertain terms that the “unity of the APC in the House is central to ensuring that the party delivers the promised change to Nigerians”.
Speaking to State House correspondents, Dogara said that contrary to the public image painted by members of the Loyalist Group, his loyalty to the party remained unshaken.
He said: “I have always stood firmly by the party, there has never been a time that I never stood firmly by the party.
“So, like my chairman has explained, we are going into consultations with the party and I am sure sooner than later, we will have good news for Nigerians”.
On his part, Gbajabiamila said party supremacy was exhaustively discussed, adding that the outcome of another consultation towards an early resolution of the crisis would be made public.
“We are still talking. But I think this is the first time everybody is coming together in a cordial atmosphere. We came together for the first time as one family, with a lot of camaraderie.
“I think we are almost at the point where all of these will be behind us. Hopefully, by tomorrow (today). It is not about magic; it is about what should have been done a long time ago.
“We have finally sat down together and we will resolve it before the night, in a couple of hours.The important thing is that the country wants to move ahead. The House wants to move ahead and the party wants to move ahead. Move ahead, we shall.
“Whoever or whatever outside forces that might have been stoking the fire, I think we would put that to an end this evening at the meeting”, he said.
Odigie-Oyegun expressed optimism that the party would have good news for the nation by tomorrow (today).
He said: “Everything is upbeat. You can see that I am smiling. You will be very surprised that a lot was achieved in 20 minutes.
“As the chairman of the party, I can say that there are no discordant tunes. You can see the Speaker of the House standing firmly beside me and I have a feeling that in another three or four hours and by tomorrow, we will have good news for the nation.
“It is never too late to straighten the path”.