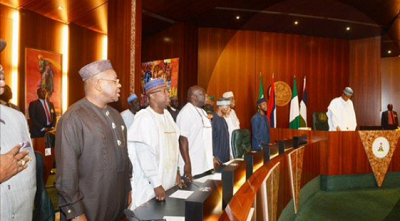 Despite sharing $2.1 billion dividend paid into the Federation Account by the Nigeria Liquefied Natural Gas (NLNG) company about three weeks ago, indications have emerged that Governors are set to press for another bailout fund from the Federal Government when the National Economic Council (NEC) meeting is convened at the Presidential Villa, Abuja.
Some of the states are still owing workers’ salaries despite benefitting from the largesse shared recently.
Chairman of the Nigeria Governors Forum and Zamfara State Governor, Alhaji Abdulaziz Yari, who dropped the hint after meeting with Vice President Yemi Osinbajo on Tuesday, said he came to find out the update on the agreement for a bailout fund to be facilitated by the Central Bank of Nigeria (CBN) for governors during last NEC meeting.
According to the NGF chairman, he was at the Presidential Villa to know how far the Presidency has gone with the CBN in sourcing the bailout funds ahead of the NEC meeting for Thursday.
He said: “Any way, we discussed about the issue of the special intervention funds. In our last meeting with the President, we agreed in the National Economic Council that there will be a special intervention from the Federal for the states that cannot be able to foot their salary arrears to their workers.
“More especially, both the states and Federal government were affected by the unpaid salaries. Because this issue of unpaid salaries is not only for the states, even the federal government is suffering the same thing.
“We followed up to know how far they have gone with the CBN Governor and now we have gotten the brief but the CBN governor is out in Washington and immediately he comes back, we are going to take up the matter to see the end of issue of unpaid salaries to the workers”.
On the renewed attacks by Boko Haram attacks, Mr. Yari said that government was doing everything possible to counter the insurgents, prevent their bombs and dislodge their suicide bombings.
“So the government and the security agencies are doing their best to ensure that peace is restored.
“We are working and now it is responsibility of our government to ensure security of lives and property of the people. And the issue of Boko Haram is number one that Mr. President is discussing with the President of the United States and the supports he is going to give Nigeria to ensure that the issue of insurgency comes to an end”, he said.
He added: “And the government is going to put their machinery in place, most especially the military and security in place to ensure that the insurgency comes to an end”.