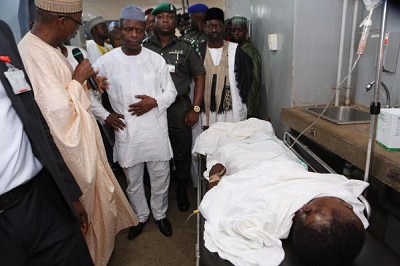 The Vice President, Yemi Osinbajo, on Friday said the Nigerian Government was committed to stamping out the activities of insurgents in the country.
Mr. Osinbajo said this in Gombe when he paid a condolence visit to families that lost their loved ones in the Gombe central market twin blasts on Thursday.
“The incident is unfortunate; we are convinced we are going to stamp out insurgency in the country”, he said.
Mr. Osinbajo said he was directed by President Mohammadu Buhari to commiserate with the people of Gombe over the incident.
“This morning when we paid the president Sallah homage, he asked me to come to Gombe to commiserate with the people, the Emir and governor of Gombe over the terrible incident that happened.
“He said I should let them know that we are with them; we heard about the death of men, women and children and we feel your pains.
“People should be rejoicing in celebration of Sallah but instead they are mourning; it is unfortunate”, he said.
Mr. Osinbajo said it was the duty of the government to protect the lives and properties of the citizenry.
“I salute the braveness of Gombe people. In spite of the unfortunate incident they are still in the market.
“This is because they know, it is only God that can protect them, men can only do their best”, he said.
Governor Dankwambo, in his speech thanked Mr. Osinbajo for the visit, adding that the people of Gombe State were highly honoured by the gesture.
The Emir of Gombe, Abubakar Shehu, also thanked the vice president for the visit.
He said the visit did not come to him as a surprise considering the love Messrs. Buhari and Osinbajo have for Gombe people and the entire north east.
The Vice President visited the Federal Teaching Hospital Gombe, to see the victims of the blast.
He also visited the scene of the blast, and some bereaved families.
A twin blasts at Gombe central market on Thursday claimed over 50 lives and left many people wounded.
(NAN)