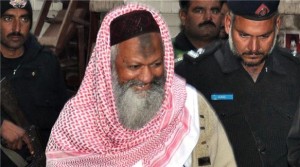 Pakistani police have killed the head of the banned group Lashkar-e-Jhangvi as he attempted to escape custody in Punjab province, officers have said. Malik Ishaq, along with his two sons Usman and Haq Nawaz, and 11 others, were killed in an exchange of fire with police personnel late on Tuesday night, police said. At least six policemen were injured in the encounter.

Al Jazeera’s Kamal Hyder, reporting from Islamabad, said: “Malik Ishaq was arrested one week ago along with his sons. He had already spent 14 years in jail and was released on bail in 2011.” Ishaq was on a US list of global “terrorists” and the group he founded has claimed responsibility for the deaths of hundreds of civilians, most of them minority Shia Muslims.

Ishaq and his sons were arrested by the country’s Counter-Terrorism Department (CTD) a week ago.

Two high-ranking police officers told the Reuters news agency that Ishaq and his two sons were being moved between detention centres when a group of armed men attacked the convoy and freed them. A spokesman for the CTD said Ishaq, his two sons, Ghulam Rasool Shah, and two other accused, all from Lashkar-e-Jhangvi, were being taken to Muzaffargarh by the department to aid in the recovery of arms and explosives.