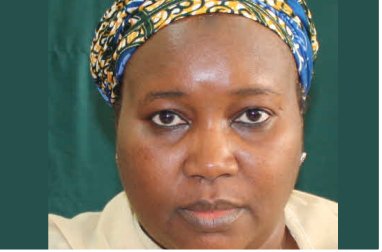 The Peoples Democratic Party (PDP) says it would not stop calling for the removal of the acting Chairman of the Independent National Electoral Commission (INEC), Mrs. Amina Zakari, despite unwarranted attacks on its officials by the Presidency.

The party said it is privy to the fact that “Mrs. Zakari, who has a strong relationship with President Muhammadu Buhari and a very prominent APC Northwest governor is collaborating with the ruling party to post Resident Electoral Commissioners of its choice to Kogi and Bayelsa ahead of the forthcoming governorship elections in those states”.

The opposition party also alerted of moves to use the duration of Mrs. Zakari’s stay as acting head of the electoral body to tinker with electoral personnel and materials for the two states in favour of the APC.

In a statement on Saturday by its National Publicity Secretary, Chief Olisa Metuh, PDP said “President Buhari, in appointing Mrs. Zakari, failed to take into cognizance the moral call to detach himself from the operation of the electoral body thereby completely eroding the independence of the commission”.

The party noted that the issue at stake is not that of Mrs. Zakari’s competence or performance in office but the fact of nepotism and her closeness to the President and some key APC leaders, which brings to question the independence of the electoral body under her.

“We want Nigerians to know that with this appointment, INEC has been stripped of its independence and can no longer command the confidence and respect of the citizens and all other critical stakeholders in the nation’s electoral process.

“We however find it astonishing, discouraging and disheartening that the spokesperson of the President will address Nigerians and lie to the entire citizenry that Mrs. Zakari never had any relationship with the President or an APC Governor in the Northwest. This is the height of deception coming from the respected office of the President of our dear country.

“We ask, is the spokesperson of the President, oblivious of the public fact that the Acting Chairman of INEC was once a staff of Afri-Project Consortium, a company well associated with the President?

“Is he by any means feigning ignorance of the fact that Mrs. Zakari also worked in the past as Secretary of Health and Human Services, Social Development and later, that of Agriculture and Rural Development in the Federal Capital Development Authority, then under a current APC governor of the Northwest?

“How much of Mrs. Zakari’s roles in the last general elections does the spokesperson of the President, who has just been appointed, know to warrant his brazen defence?

“Even where we concede to the worn-out argument that the President has the powers to appoint any person he deems fit as the INEC Chairman, does moral obligation not demand that in doing so he should take into cognizance the sensitivity of the position? Otherwise he can as well appoint his wife or brother as the electoral umpire on an argument of merit.

“Whilst the PDP might not be opposed to Mrs. Zakari becoming one out of the numerous national electoral commissioners to be so appointed, we completely reject her being an executive chairman who takes major decisions in an independent electoral commission while having a strong relationship with the President and a prominent APC Northwest governor.

“Indeed, never in the history of Nigeria has there been an executive chairman of the electoral body with such strong relationship with the president of the country.

“If therefore the stance and choice of words of the Presidential spokesperson, which apparently fall short of the civility of a democratic setting, reflect in any way those of President Buhari, then there is serious question on his credentials as a converted democrat.

“Conversely, we caution that presidential spokespersons in representing the President, must note that the psychology of their personal sudden flight to political limelight should not engineer a trauma of monumental deceit to our great nation”, the PDP said.

Insisting that Mrs. Zakari must be removed, the PDP said having in the last 16 years reformed the nation’s electoral system to an enviable status that is being commended by the international community, it cannot sit back and watch too early in the day, its gradual destruction by partisan interests.

The party, therefore, urged Nigerians, especially key stakeholders in the democratic process “to rise above sectional, religious, gender and partisan biases and put the independence of INEC, the credibility of the electoral process and the overall interest of the nation above every other consideration in their comments and views on the appointment”.