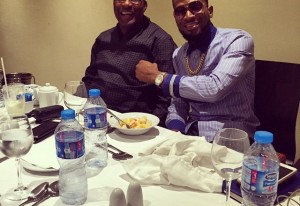 The Eje’nla himself, D’banj, has ignored all rumors that he’s currently broke and continues to live amongst and dine with the mighty.

D’banj aka Bangalee, last night shared a photo as he was dinning with the Lagos State Commissioner of Police, Fatai Owoseni who was recently deployed to Lagos by the Inspector General of Police, Solomon Arase.

For his caption, the DB Records boss described the new commissioner as the ‘finest Police Office Ever’.