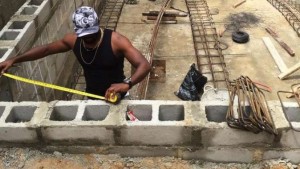 From all indication, elder brother to the P-Square duo is a ‘Jack of all Trades’

The manager, music and video director, businessman, record label owner, seems to have now become an expert in building houses.

In the new picture, Jude Okoye is measuring out a space in his uncompleted house. “Building my home, literally” wrote Jude Engees in the caption.

The Okoyes are known to have several mansions including the Squareville mansion in Omole, Lagos and another in Jos.

On July 17, 2015 Jude Okoye celebrated his one year wedding anniversary with Ify Okoye.