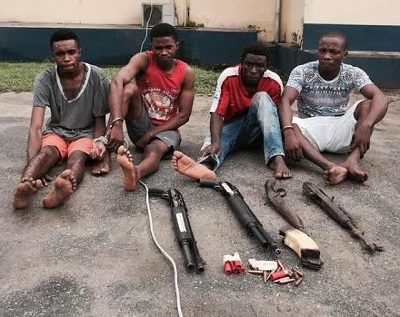 The suspected killers of one Friday Ozogo have been paraded in Port Harcourt by the Rivers State Police Command.

Parading the three suspects whose names were given as Kelvin Ogbulaon, Chiwendu Akani, and Nelson Kacaranmoh, shortly after a joint press conference with Rivers State Governor Nyesom Wike on Monday, the state Commissioner of Police, Chris Ezike said the suspects abducted their victims at the Elekahia part of Port Harcourt .

According to Ezike, the kidnappers killed their victim and hastily buried him in a shallow grave around Choba waterfront and pestered the family of the victim to pay a ransom of more than N500,000.

“On July 5, one Friday Ozogo was kidnapped around Elekahia by a gang of three armed men. For inexplicable reasons, the kidnappers killed their victim and hastily buried him in a shallow grave around Choba waterfront. Unfortunately, despite their callous actions, the kidnappers continued to harass the victim’s family for ransom, and have collected over N500, 000.

They pestered the family until the police through diligent investigation tracked them down. The trio of Chiwendu Akani, Nelson Kacaranmoh, and Kelvin Ogbulaon were arrested. The suspects confessed to the crime and took the police to the location where their victim was buried. The corpse was exhumed and taken to the mortuary for autopsy. The police also recovered two locally made pistols from them”, he said.

The police commissioner added: “In another case, one Elijah Owoh was arrested for involvement in armed robbery. During investigation, it was revealed that he had taken part in a robbery incident in which a male victim was killed around Eneka farm road, Port Harcourt. He admitted being a soldier”.

During interrogation, the suspects said they were contracted to execute the job for N1million.
Earlier, Governor Wike commended the police for their performance and encouraged them to do more.