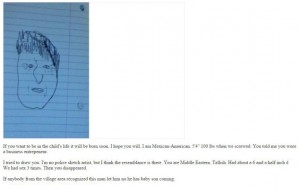 A woman in New York, took to Craigslist to search for the father of her unborn baby.  The woman who identified herself as a “Mexican-American,” said that she became pregnant after having sex with a man she met on Craigslist. Worldwideweirdnews reports:

She now turned to Craigslist, with a horrible sketch of a man in an attempt to try to locate the person who got her pregnant. She then posted a note to the man saying: “If you want to be in the child’s life it will be born soon. I am a Mexican-American. 5 feet 4 inches tall and 100 pounds,” she wrote. She then went on to tell the man:
“when we had sex, you told me you were a business entrepreneur.”

In an effort to identify the anonymous man, she wrote: “I tried to draw you. I’m no police sketch artist, but I think the resemblance is there. You are Middle Eastern, tall, and you have about a 6 and a half inch d***. We had sex 3 times. Then you disappeared.”

She asked people to help her identify the mystery man so that she can let him know that he will be a father soon.  Her post was removed from Craigslist after it went viral.