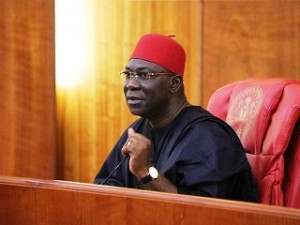 Governors elected on the platform of the People’s Democratic Party (PDP) yesterday cautioned the Inspector-General of Police, IGP Solomon Arase against overheating the polity over plans to arrest and investigate the Deputy President of the Senate, Senator Ike Ekweremadu on alleged alliteration of the Senate Rules.

In a statement released in Abuja by the media office of the governors under the aegis, PDP Governors’ Forum, condemned police harassment of Senator Ike Ekweremadu under the guise of investigating the alteration of senate standing rules. The forum described the moves by the Police as the obvious prodding of the police by the Presidency and the APC as a result of “their desperation to remove the deputy senate president who was elected by his peers.”

Senator Kabiru Marafa (Zamfara Central) had on June 10, 24 hours after the inauguration of the Eighth Senate and election of its presiding officers – Senate President Bukola Saraki and Ekweremadu as his deputy, raised the allegation of forgery of the Senate’s standing rules, an allegation he raised again through another point of order on June 23.

Ekweremadu had explained that every edition of the Senate standing orders was only valid for a tenure of four years. He said it was the tradition of the management of the National Assembly to always hand a new edition of the orders to every senator on the day of inauguration of a new Senate.

He added that the 2011 edition could not have been valid in 2015 for a new legislative assembly.

Marafa was ruled out of order by Saraki, but another All Progressives Congress (APC) senator, Suleiman Hunkuyi, took the matter a step further by petitioning the Inspector General of Police (IG), Solomon Arase, alleging forgery and calling for a thorough investigation.

The PDP governors also called on the Acting Chairman of the Independent National Electoral Commission, Hajia Amina Bala Zakari to resign as quickly as possible because of obvious conflict of interests as a result of her alleged long standing relationship with President Muhammadu Buhari both on family and official levels.

“The honourable thing for Mrs. Zakari to do is to recuse herself of this role as nobody who knows the level of her relationship with the President can believe she will be impartial in her conduct of any matter that the President has vested interest, in this case the success of APC over the PDP in any election especially with the governorship elections coming up in Bayelsa and Kogi states.”

The governors called on Nigerians to hold the APC accountable to all the broken promises so far claiming that the ruling Party has shown itself incapable of delivering on the change it promised during the electioneering campaigns.