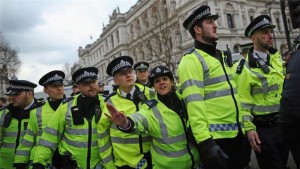 British police have been criticised after a newspaper revealed evidence of conversations between serving and former officers making ethnic slurs.  The comments published in The Independent on Sunday were made in a secret Facebook group called I’ve Met the Met, which uses the abbreviated name for Greater London’s Metropolitan Police Service. Aljazeera has more:

Members of the group made jokes and used slurs targeting the UK’s Gypsy and Traveller communities, names given to distinct ethnic groups known for their nomadic lifestyles.

One post said that it could be determined that a Gypsy was lying when their lips moved, and others referred to common stereotypes about the communities’ association with petty crime. “I never knew a Pikey could be offended. I thought they were devoid of all normal feelings and thoughts,” said one user, referring to a term used to describe Traveller communities, but considered offensive by the community itself.

The incident is not the first in which London’s police service has faced charges of racism. The Met faced criticism from the British media and politicians alike for its handling of the racist murder of black teenager Stephen Lawrence in 1993.