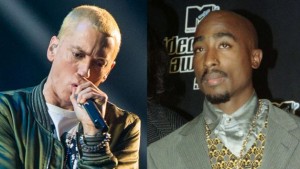 A lot of people never knew that Eminem and 2pac, had any sort of connection.

Anyways, after 2pac died, the white rapper penned a heartfelt letter to 2Pac’s mom, Afeni Shakur, and also included a pen sketching of the late emcee.

In the writing, Eminem appreciates Afeni for supporting him throughout the years and tells her how much he appreciates her son’s music.

Basically, the final sentence says it all: –

When I was feeling at my worst; (before fame, before Dre) I knew I could put that “Tupac” tape in, and suddenly things weren’t so bad. He gave me the courage to stand up and say, ‘F*** the world!’ ‘This is who I am! And if you don’t like it, go f*** yourself!’”

Read the entire letter below: –