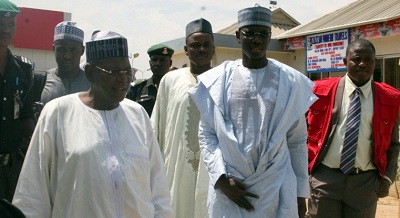 Delivering a ruling on Thursday, Justice Evelyn Anyadike ordered the accused persons to be remanded in a Kano prison custody till September 28 following arguments by Chile Okoroma, counsel to the prosecuting agency, the Economic and Financial Crimes Commission that its facilities both in Abuja and Kano were filled to capacity.

Reacting to the ruling, the former military governor said the charges proffered against Lamido and his sons are a bailable offence, hence, it is strange that not only were they refused bail but they are remanded in prison custody for about three months.

“This means that both Sule and his sons have started serving a prison sentence even before the commencement of their trial.

“It behoves on all men of good conscience to appeal to the trial Judge to reconsider this high -handed decision. The principle of the accused being adjudged innocent until proven guilty must apply in this case”, he said.

Umar added that he is also aware that persons with similar cases had been granted and are being granted bail in apparent reference to former Governor of Adamawa State, Murtala Nyako and his son, Senator Abdulaziz Nyako, who are standing trial before a Federal High Court sitting in Abuja for an alleged N35 billion money laundering offence.

“We appeal to the trial judge to temper justice with mercy by granting Governor Sule Lamido and his sons bail”, the retired colonel pleaded.