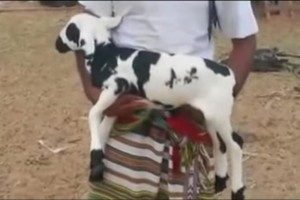 A Saudi farmer who claims his “miracle” sheep was born with the name “Muhammad” on its body in Arabic says he was offered $400,000 for the animal.

According to Scoop, Mohammed bin Yehya Al Addawi, a farmer in the village of Jizan, said his black-and-white sheep was born with the Muslim prophet’s name written on its body in Arabic letters. A video of Al Addawi holding the sheep was posted to YouTube.

The farmer said he was offered $400,000 for the sheep, but decided to retain ownership of the “heavenly miracle.” “Many people come to see it and all of them admire the way the word is written,” Al Addawi told the Sada newspaper.