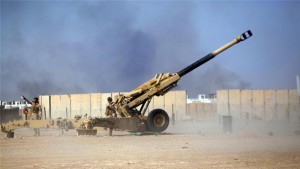 At least 73 people have been killed in the western Iraqi cities of Ramadi and Fallujah, as the Iraqi government stepped up air strikes and artillery fire against the Islamic State of Iraq and the Levant (ISIL) armed group, sources told Al Jazeera.

An air strike on a sports field in Ramadi shortly after midnight on Sunday killed at least 50 people and left more than 30 people injured. At least 23 people were killed and around 40 wounded after shelling north of Fallujah. Hospital officials said most of those killed were young men and described them as civilians, a claim disputed by Iraqi security officials, who said those targeted were members of ISIL. .

Al Jazeera’s Jane Arraf, reporting from Baghdad, said sources in the city had accused the Iraqi government of using barrel bombs. “In this latest attack we’re told that young men had gathered after breaking the day’s fast to play traditional games including soccer,” Arraf said. “We’re also told by local sources that they were joined by members of ISIL, trying to recruit some of them, and that’s when they air strikes happened.”

The Iraqi army’s Anbar Operations Command said they launched air strikes in the city, aimed at what they called an ISIL gathering. In Fallujah, which is also held by ISIL, 23 people including five women and seven children, were killed after Iraqi government forces shelled areas in the north of the city, hospital sources told Al Jazeera.