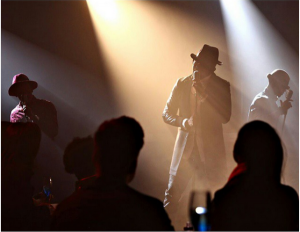 EME boss, Banky W has continued his progress as a successful singer, songwriter and director.

The Samsung ambassador is currently working on the video for his latest single ‘High Note’ with the script written and directed by him.

Banky W explained that he was a real trooper throughout the shoot, especially because he had been sick.

He shared ‘Most people didn’t realize it but I was sick as a dog and on painkillers and flu pills, just tryna get through the shoot. Thank God for grace’.

See photos behind the scenes below: –