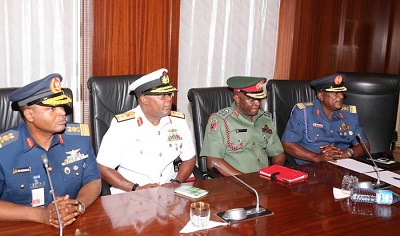 The non-composition of standing committees by the Bukola Saraki-led Senate would not affect screening of the newly appointed service chiefs when the Red Chamber resumes plenary next week.
The assurance was given by the Senator representing Kogi West, Dino Melaye, on Sunday.
According to the Senator, the development would make the senate leadership set up an ad hoc committee that would carry out the work of three committees of Defence, Army, Navy and Air Force.
Melaye said, “I think the senate president will announce the names of standing committees as soon as the Senate resumes plenary next week. However, an ad hoc committee would be set up to screen the service chiefs”.
President Muhammadu Buhari is expected to send a letter to the Senate President as from July 28, when the Senate is expected to resume plenary, informing him of the appointment of the new service chiefs and seeking their screening and clearance.