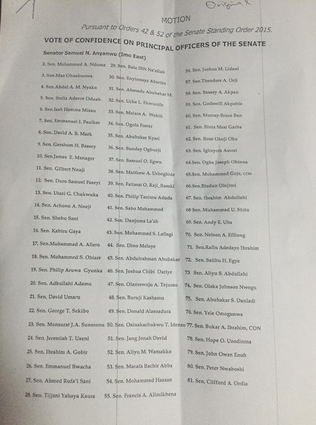 As the Senate resumed yesterday, a Vote of Confidence was passed on Senator Abubakar Bukola Saraki’s presidency, an indication that the leadership crisis in the red chamber is over.

The motion, which was moved by Senator Samuel Anyanwu (Imo east), had a wide range of support base and acceptance of majority of the Senate, as 81 Senators supported the motion.

It would be recalled that Saraki emerged President of the 8th Senate entirely on the goodwill of majority of the Senators who voted for him as their preferred choice against the wish of some party leaders who had at a mock election proposed leaders for the National Assembly.

In a welcome speech, Saraki charged Senators to jettison any act of politicking that is capable of distracting them from the core business of governance and delivering change to their constituents.

“Nigerians did not give us our mandate to come and pursue leadership, their mandate was for us to pursue governance and bring solutions to their burning issues,” Saraki was quoted to have said. According to him, leadership is secondary to our primary responsibility of good governance.