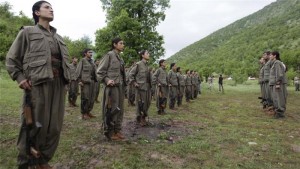 In the eastern province of Kars, PKK fighters detonated a bomb they had placed on rail tracks and later fired on rail workers sent to repair the line, Adem Unal, the region’s deputy governor, told the state-run Anadolu Agency. One of the workers was killed.

Violence has flared in Turkey in the past week, after the PKK claimed responsibility for the deaths of two Turkish policemen in the Kurdish majority city of Sanliurfa, near the Syrian border, and the government in response launched aerial strikes against PKK bases in northern Iraq.

The incidents have shattered the fragile peace process launched in 2012 with the Kurds. Turkish Prime Minister Ahmet Davutoglu has said Turkey’s actions against the PKK will continue until its fighters lay down their arms.