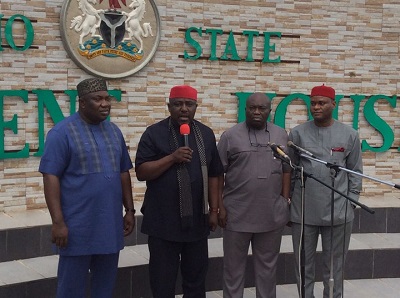 Governors from the Southeast have condemned the relocation of Boko Haram suspects to prison facilities in the zone, particularly the Aguata Prison in Ekwuluobia, Anambra state by the Federal Government.

The Governors, who met under the aegis of Southeast Governors Forum on Sunday in Owerri, the Imo State capital, noted that the relocation of the suspected terrorists is already creating palpable fear and security tension in the zone, especially around the state where the prisons are located.

Briefing journalists shortly after the closed door meeting that lasted for about two and a half hours, the host Governor, Rochas Okorocha, said that they have deliberated on the possible consequences of the relocation of the Boko Haram suspects and concluded that it was not in the best interest of the zone.

While admitting that the decision was a purely security matter, the governors stressed that it has a far reaching effect on the psyche of the people in the zone.

“We are appealing to the Federal Government to have a rethink on the relocation of the of the Boko Haram suspects. If there is any place they should be relocated to it should be Abuja where they have enough security. The issue is already creating security concern in the zone”, Okorocha said.

He, however, ruled out any plan by the Governors to recall the Igbo in the troubled North, stressing that, “we are all part of the entity called Nigeria and we share in the plight of our brothers in the North East, so it is not the issue of recalling the Igbo in any part of the country but to make sure that they are secured anywhere they find themselves”.

The Forum according to him, also deliberated on the fate of the Igbo displaced in the North as a result of the insurgency and appealed to the Federal Government to adequately compensate them.

The meeting was attended by all the governors in the zone except Willie Obiano of Anambra, who sent his regrets for being absent.