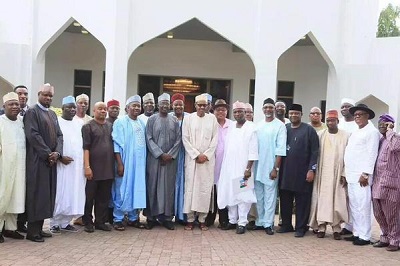 State Chairmen of All Progressive Congress (APC) on Saturday in Abuja, passed a vote of confidence on President Muhammadu Buhari, endorsing his leadership style.

The spokesman of the 37 state chairmen of the APC, including the Federal Capital Territory (FCT), Umar Doruwa, confirmed this development to State House correspondents in Abuja.

He said the chairmen passed the vote of confidence at a meeting between them and the President, held at Aso Rock Villa, Abuja.

According to him, the decision of the chairmen was informed by the President’s leadership style which respects the rule of law, saying such virtue would further strengthen institutional structures and entrench genuine democratic culture in the country.

Mr. Doguwa, who is the Kano State APC Chairman, said in less than 100 days of the Buhari Administration, Nigerians had witnessed noticeable positive changes.

He said President Buhari assured them of his commitment to resuscitate the economy, safeguard lives and property, as well as create employment opportunities for youths across the country.

On the position of APC on the leadership structure of the National Assembly, Mr. Doguwa stated that the matter had been resolved amicably.