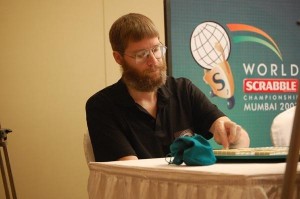 Nigel Richards is a beast when it comes to the game of Scrabble. He’s so good that he recently won the French Language Scrabble Championship without even speaking the language. ‘

“He doesn’t speak any French at all – he just learned the words,” Nigel’s friend Liz Fagerlund told the media. “He won’t know what they mean, wouldn’t be able to carry out a conversation in French, I wouldn’t think.” No wonder they call him the ‘Tiger Woods of Scrabble’.

French journalist and self-confessed Scrabble lover Jean-Baptiste Morel wrote: “He doesn’t speak French, but he learned to play in our language by reading the words of the ODS (Official Scrabble Book) as if it were a sequence of letters to learn. The man, as well as having a perfect command of the vocabulary, possesses an impressive game tactic that allows him to leapfrog the competition.” Morel added that Richard had managed to win in spite of a “pretty rotten” draw of letters.