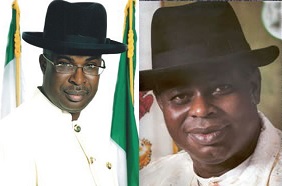 Some aides of former Bayelsa State Governor, Chief Timipre Sylva have slammed the first civilian governor of the state, Chief Diepreye Alamieyeseigha, over his endorsement of Governor Seriake Dickson for a second term.
They also gave Alamieyeseigha knocks for rating the performance of the Sylva administration as poor, saying his view was biased.
Alamieyeseigha, had during an interactive session with journalists at the weekend, maintained that Dickson deserved a second tenure, describing his performance in the last three and a half years as very impressive, visible and commendable.
The former governor, whose tenure was cut short by impeachment and subsequently jailed for money laundering and looting of public funds, had rated Dickson’s administration higher above his predecessor, Sylva, in terms of infrastructural development and socio-economic policies.
While claiming that he was not out to castigate the administration of Sylva in the state, Alamieyeseigha pointed out that the administration of Dickson had done more with noticeable infrastructural development in most parts of the state despite the challenges of dwindling revenue and finances.
But Sylva’s aides, while reacting to the comments yesterday, said the ex-governor’s position was a show of shame and bias.
Protocol Officer to Sylva, Melford Esinte, in an electronic mail, said the claims by Alamieyeseigha was wrong and misplaced.
Esinte said, “Sylva never abandoned any project. The Judiciary Complex started by Goodluck Jonathan and the Banquet Hall of the Government House as well as the New Governor’s Lodge in Creek Haven were completed by Sylva. Sylva bought brand new gas turbine which the present government has failed to maintain.
“The so-called Tower Hotels designed by Alamieyeseigha and Jonathan could not be completed for years, was inherited by Sylva administration at the fourth floor. Sylva raised it to the 14th floor level that it is today”.