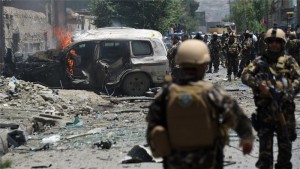 The first officially acknowledged peace talks between the Afghan Taliban and the government in Kabul have concluded with an agreement to meet again after the Muslim fasting month of Ramadan, according to Pakistani officials.  Aljazeera has more:

Pakistan hosted Tuesday’s meeting in a step towards ending more than 13 years of war in Afghanistan, in which the Taliban have been fighting the government. Officials from the US and China were observers in the talks held in the town of Murree, a hill resort on the outskirts of Islamabad, a statement from Pakistan’s foreign ministry said.

Al Jazeera’s Kamal Hyder, reporting from Islamabad, said the talks were held in a cordial atmosphere.

“Although it is not clear as to who was representing the Taliban, the Pakistani foreign office has issued a statement saying the meeting between representatives of the Afghan Taliban and Afghan government was in the presence of representatives from the US and China – with full backing of the leadership – met in Murree which is a 45 min drive from Islamabad”

“Pakistan thanked all parties including the Taliban for participating in those talks although the Taliban are in the offensive in the province of Kunduz,” Hyder said.