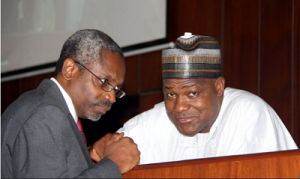 Members of the House of Representatives supporting Femi Gbajabiamila, who lost the Speaker’s seat to Yakubu Dogara has accused the Speaker and his associates in the House of planning to decimate the All Progressives Congress (APC) before returning to the Peoples Democratic Party (PDP).

In a closed-door session with President Muhammadu Buhari on Wednesday night, reportedly convened to lessen tension ahead of today’s National Executive Committee (NEC) meeting of the party, the Gbajabiamila camp also dismissed assertions by allies of Dogara that the party’s proposal for Gbajabiamila to become House Leader was a violation of the federal character principle, saying the principle was inapplicable in the distribution of offices in the House.

“It is noteworthy that Mr. President and the Governors have strongly put their weight behind the party and had severally admonished the House to abide by the party’s position. The 39 APC members in the House continue to collude with the PDP to flagrantly disobey Mr. President, the governors and the party with a view to bringing the party and government to ridicule before Nigerians,” the 30-member Gbajabiamila group said.

“The conduct of the 39 APC members colluding with the PDP is tantamount to affront, ultimately targeted at polarising our party so as to give room for many of them to decamp to the PDP.

“It is therefore imperative for Mr. President to take a stand and save the integrity of the party by cautioning the 39 members, which include the Speaker and the Deputy Speaker, to respect, honour and obey our party Leaders and their directives.”

Also, in articulating their positions against federal character which Dogara cited as the reason why Gbajabiamila could not become House leader, the group noted how the different political parties had in the past thrown up principal officers from the same zone.

“It should be noted that the Federal Character principle as embedded in the 1999 Constitution (as amended) is not justiciable and of no legal consequence. Its provision in Section 14 of the Constitution is only applicable to appointments in federal ministries and agencies. The House of Representatives is not an agency of the Federal Government and the principal officers positions are elective and not by appointment. If the federal character principle is applicable to the National Assembly, then both the Senate President and the Speaker cannot come from the North, one of them should be advised to step down.”

“We strongly appeal to you to direct the Speaker to return to our fold and be truly elected Speaker on APC platform. He should be directed to announce the other four party principal officers positions as directed by the party as it has always been the convention.”

Supporters of Dogara were meanwhile, livid over the presentation, saying it was evident that the Gbajabiamila group did not want reconciliation.