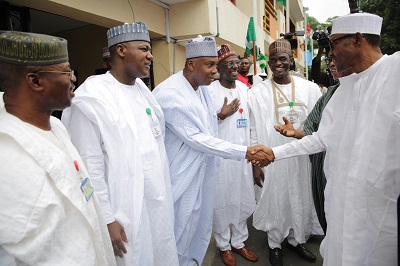 The Senator representing Bauchi South Senatorial District at the National Assembly, Senator Ali Wakili, has debunked rumours making the rounds that there is a cold war between President Muhammadu Buhari and the Senate.
The senator, who spoke at a press briefing in Bauchi on Monday, said such unfounded rumours were meant to generate “bad blood” between Mr. Buhari and the Senate President, Dr. Bukola Saraki.
Last Friday it was alleged that the Permanent Secretary in the Federal Ministry of Finance, Mrs. Anastasia Nwaobia had shunned an invitation to appear before the Senate to brief it on some issues of national importance because she was not cleared by the Presidency to do so.
The reports further claimed the development was an indication the Presidency was not ready to accept the legitimacy of the Senate leadership under Saraki.
Reacting to the speculations, Wakili said, “I am getting sick of how some people are trying to destabilise the nation through false propaganda by creating bad blood between the National Assembly and the President.
“As one of the Senators that supported the Senate President, I know for sure that neither Saraki nor any supporter of Saraki has the idea of fighting the Presidency.
“We are sick and tired because our names are being dragged into the mud. Our constituents are asking us questions why we are quarreling with Mr President? We have taken our time to explain that there is no quarrel between Mr President and the Senate”.
According to Wakili, the power of the Presidency and that of the Senate and the judiciary are spelt out in Sections 4, 5 and 6 of the Constitution.
“If you go into the Constitution on the issue of oversight function, you will discover that the National Assembly has oversight function on all government activities that will not warrant that there is going to be a clash between the National Assembly and the Presidency, especially under President Muhammadu Buhari”, he said.