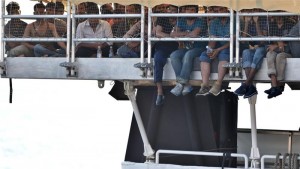 Around 2,700 migrants have been rescued from 13 boats near the coast of Libya, Italy’s coastguard said. A German navy vessel and a search and rescue ship deployed by medical charity Doctors Without Borders participated in the rescues on Wednesday, along with the Italian navy and coastguard. Aljazeera was there:

A spokeswoman for the Italian coastguard said the rescues had all been carried out in an area around 55km from the coast of Libya.  An estimated 150,000 migrants have reached Europe by sea so far in 2015, most of them in Greece and Italy, the International Organization for Migration (IOM) said last week.

More than 1,900 migrants have drowned in the Mediterranean, twice the toll during the same period last year, said IOM spokesman Joel Millman. The United Nations refugee agency said on Friday that Greece urgently needed help to cope with 1,000 migrants arriving each day.

The vast majority of the migrants fleeing war and poverty in Africa and the Middle East depart from Libya, where human traffickers have taken advantage of a breakdown in order to build up a lucrative business. EU foreign ministers last month approved the launch of a military operation against people smugglers in the Mediterranean, with ships and aircraft conducting intelligence gathering missions.