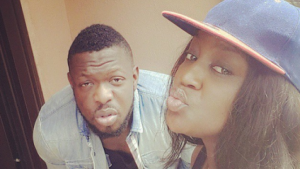 Social media and blogs were filled on Saturday, July 25, 2015, with the news that a woman named Shella B was allegedly raped by Timaya in Atlanta, U.S.A.

After a couple of hours, Timaya denied the raping story stating that the sexual encounter was consensual.

As if to prove her motive, the strange woman, Shella B released her music single on the same day, hours after saying Timaya raped her.

On Sunday, July 26, 2015 Timaya’s baby mama Barbara responded to the claims with a religious caption below a picture of her first daughter Emma that she shared.

“Even when the devil tries to steal my happiness your smiles sunshine makes life more beautiful…..Happy Sunday ya all” she wrote in the caption.