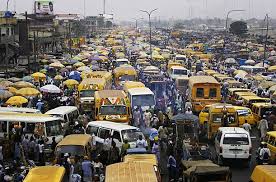 Lagos is a south western state in Nigeria. One very ironical thing most people don’t know about Lagos is that it is the smallest in area of Nigeria’s 36 states, yet Lagos has one of the highest population in the country. Some will argue that Lagos is by far the most populated state in Nigeria (which school of thought do you belong?). This large number of people concentrated in a very small area makes Lagos a very congested place. This means an average Lagos resident have to meet several people from different tribes of the country on a daily basis. Having to interact with people from different part of Nigeria who do not speak the same language makes surviving on the streets of Lagos a herculean task. In order to survive and survive well on the streets of Lagos, here are the top 3 languages you need to understand at the very least as put together by INFORMATION NIGERIA:

The easiest way to get across to an average person on the street of Lagos is Pidgin English. You will be saving yourself a lot of stress if you stopped forming ‘tush’ on the street of Lagos and just speak this hybrid language that has kept the different tribes coexisting in the state since its inception. Even the most ‘aje butter’ of the ‘aje butters’ understand this language. They only pretend they don’t until they run into trouble with the popular Lagos ‘agbero’ and badly needs to explain there way out of the situation.

If you doubt why Yoruba is second on the pecking order, wait till you enter the popular Lagos commercial bus, ‘Danfo” and need to ask for your change. The conductors of these ‘Danfo’ buses are ever willing to run off with your change if you won’t speak up and ask for your change like an everyday Lagosian who understands the system would. You can actually converse with a number of these ‘Danfo’ conductors and their drivers in Pidgin English, but in the case they are not responsive, please for the sake of your change, learn some basic Yoruba to help you out in a situation like this. The Lagos market is another place you are always in dire need of Yoruba. Most of the market women in Lagos are local indigenes, from places like Isale Eko, Bariga etc. who have no idea what English or Pidgin English is.

Lagos is unlike most states in Nigeria where a basic understanding of the local indigenous language and a little bit of Pidgin English is enough to get you through everybody you come in contact with. In Lagos, a good understanding and command of the English language gives you that classy touch. Lagos is often described by people from other states as ‘Eko for show’, meaning ‘people living in Lagos show off a lot’. To live up to this popular description that makes Lagos the envy of every young person living outside the state, English is the language Lagosians who wants to show off speak often, even when it is obvious the people they are talking to do not understand.