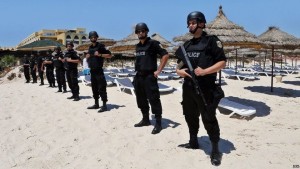 Tunisia has declared a state of emergency, just over a week after 38 tourists, mainly Britons, died in an attack in the resort city of Sousse. The state of emergency gives security forces more powers and limits the right of public assembly. Authorities had already tightened security, deploying more than 1,400 armed officers at hotels and beaches. BBC was there:

Tunisian President Beji Caid Essebsi said in a national address that “exceptional measures” were needed. “In order to face up to this scourge we need to be prepared. We need to have enough troops, proper training and material means – we are in desperate need of material means,” he said, appealing for international counter-terrorism support and co-operation.

The state of emergency will be in place for a renewable period of 30 days. An official from the prime minister’s office said several officials had been sacked in the wake of the attack, including the governor of Sousse.

“Just as there have been security failures, there have also been political failures,” Dhafer Neji told AFP. Security forces were criticised for not responding more quickly to the attack on 26 June in Sousse, when a gunman opened fire on tourists on a beach and in a hotel before being shot dead by police.