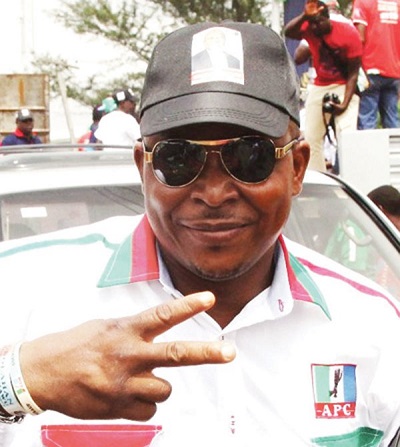 Officers from the homicide section of the Lagos State Police Command have arrested two suspects in connection with the killing of an All Progressives Congress chieftain, Salawe Daramola.
The command’s spokesperson, Kenneth Nwosu, a Deputy Superintendent of Police, confirmed the arrest in an interview on Tuesday in Lagos.
Mr. Nwosu, who did not mention if the two suspects were politicians, however, said they were arrested during the Sallah celebration in different parts of the state.
He disclosed that the suspects had been transferred to the State Criminal Investigation Department for investigation.
Two gunmen on a motorcycle last Thursday evening shot dead Mr. Daramola in Ward B in Amuwo-Odofin Local Government Area.
It was learnt that the assailants stormed the deceased’s residence at K Close, 3rd Avenue, FESTAC Town, and shot him at close range three times.
The suspects reportedly arrived at about 5.30 p.m.
Mr. Nwosu said the suspects were first interrogated by the Area E Commander, ACP, Frank Mba, to ascertain their level of involvement, and from there they were allegedly indicted before being taken to SCID.
(NAN)