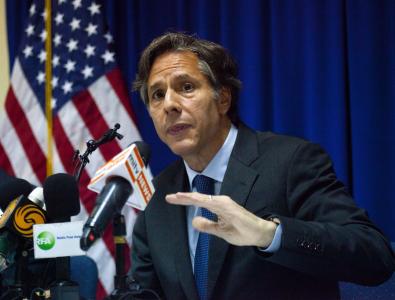 The United States on Thursday condemned the recent bomb attacks that have taken hundreds of lives in churches, mosques and a local government office.

The United States Deputy Secretary of State, Antony Blinken, who spoke at a press briefing, said defeating Boko Haram requires a comprehensive approach that involves the region and includes, not only a strong military response, but also sustainable security for liberated areas, good governance, development, and opportunity for the civilian population.

Mr. Blinken noted that it requires a strong commitment to human rights, the absence of which only alienates the people and drives them toward Boko Haram.

“As Nigeria develops this comprehensive approach, the United States will deepen our support”, he said.

Mr. Blinken, who had earlier visited President Muhammadu Buhari at the presidential villa, Abuja, explained his presence here in Nigeria was to help prepare the president for his visit to Washington on July 20.

“We look forward to welcoming President Buhari to Washington in just a week and we will continue to deepen a relationship that reflects the enduring commitment of the United States to Nigeria and its people”, he said.

He added that his presence also reflects the commitment of President Barack Obama and the United States to strengthening the partnership between the United States and Nigeria and to advance a more secure, prosperous, and peaceful future for all of Nigeria’s citizens.

“The partnership we are forging is based on mutual interests and mutual respect”, he said.

“We are proud to stand alongside the new government as it works to turn the promise of this moment into real progress for all the citizens of Nigeria”, he said.

Mr. Blinken said as the present government makes transparency and anti-corruption a priority, there is a vital and unique role for citizens and civil society to play.