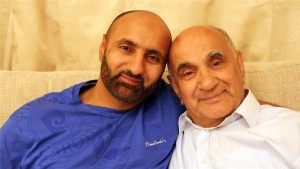 A British man convicted of supporting the Taliban in the US has been freed after spending 11 years in prison, according to a statement by his family. A picture shared on Facebook on Sunday showed Babar Ahmad at home with his father, a vocal figure in the decade-long campaign to free him.  Aljazeera reports:

The computer expert from London spent eight years in British custody without charge before he was extradited to the US, accused of running a website in support of the Afghan Taliban.

“Eleven years of solitary confinement and isolation in ten different prisons has been an experience too profound to sum up in a few words here and now,” Ahmad was quoted as saying in the statement. “In October 2012, I was blindfolded, shackled and forcibly stripped naked when I was extradited to the US,” he said adding that “US and UK government officials” had treated him with respect after his release.