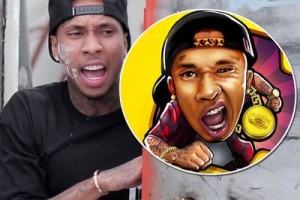 Former Young Money rapper, Tyga, has decided to try his hands on something different from music.

The rapper whose album release was a massive failure has just launched a new app where the aim is to run away from the paparazzi.

The app is called Kingin’ World Tour, and Tyga himself features in it as an avatar.

The aim is pretty simple – run away from the paps.

Players can pick up extra points along the way by collecting things and not getting photographed.

Tyga says he’s hoping for a million downloads in one week, as he’s reportedly behind on rent for his 16,000 dollar a month mansion.