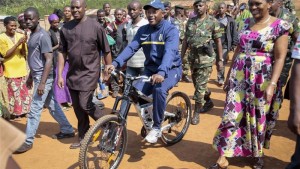 The US will review its relations and level of aid to Burundi over the next two months after the central African nation held a disputed presidential election earlier this week, the US ambassador to the country has said. The US provides training and equipment worth about $80m a year for Burundi’s military and security forces, along with other aid, supporting a nation now in crisis after President Pierre Nkurunziza ran for a third term on Tuesday. Al Jazeera has more:

Critics say seeking a third term was inconstitutional but Nkurunziza, who cited a court ruling saying he could run, is expected to be announced as the winner on Friday after an opposition boycott of the vote.

“Over the next couple of months we will be reviewing very carefully the level of our assistance, what programmes will be continued or not,” Ambassador Dawn Liberi told the Reuters news agency on Thursday, adding it would be driven by policy concerns and administrative issues. “It is a process that will obviously continue depending on what happens politically,” she said, calling for steps to ensure full democratic freedoms, disarming militias and lifting curbs on the media after private radio stations were shut down.

“What we are calling for is for all parties to go back to the mediation process and try to forge a way forward that is inclusive,” she said. The aim, she added, is to ensure US aid to the health, and other such, sectors is not affected. Opponents say Nkurunziza violated the constitution by running in Tuesday’s race.