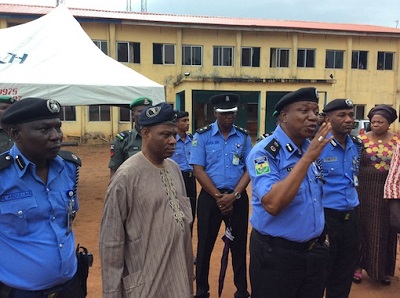 Less than 48 hours after suspected assassins hacked the Iyaloja General of Ijebuland, Alhaja Sadiat Elewuju to death in her residence, the authorities of the Nigeria Police force have assured the people of Ogun State that those responsible for the dastardly act would be apprehended soon.

Speaking at the Itorin-Sabo residence of the late Iyaloja yesterday, the state Commissioner of Police, Abdul-Majeed Alli, sympathised with the family of the deceased and assured that the police had already swung into action to arrest the perpetrators.

The police boss revealed that the command has spread its dragnet of investigation network across the state in order to unravel the circumstances that led to the death of late Elewuju.

He also said the case was an acid test for his leadership as the new police boss in the state and implored the family members of the late octogenarian to cooperate with the command in its bid to conduct proper investigation into the crime.

“It is an unfortunate incident that has happened and I’m here on behalf of the inspector General of Police and the entire police force to commiserate with the family and to assure them of the Nigeria Police support.

“This is to reassure the family and the entire people of the state that our investigation and intelligence network has been spread across the state, very soon, we will make headway. Am assuring you that as soon as those behind the crime are caught, we will let you know”, CP Alli said.