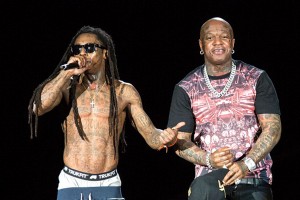 It seems the business beef between Lil Wayne and Birdman has gotten a little bit uglier than it already was.

Over the weekend, the Cash Money boss, Birdman, reportedly spilled his drink on Weezy’s head intentionally, during a club appearance.

Lil’ Wayne and Birdman were reportedly responsible for Club Liv closing early on Sunday night (July 12) in Miami. Both are parties were in the building to help Jim Jones celebrate an early birthday party and allegedly clashed when Weezy hit the stage for a performance.

According to witnesses, Baby attempted to throw a drink at Wayne while he was onstage. There’s also reports that members of Birdman’s entourage started throwing bottles of water at Wayne during his performance.

A similar incident was reported back in February.